In the 2017 Manchester International Festival (MIF), artist and musician Karl Hyde, known as one half of Underworld, joined forces with various local organisations to create Manchester Street Poem.

This installation in a disused shop on Oldham Street, Manchester was a combination of cardboard sculpture and painted words, documenting the thoughts and feelings of the region’s homeless people. However, after the festival it took on a life of its own, becoming an endless digital archive.

Now, for this year’s MIF, Manchester Street Poem has returned as a live workshop and an exhibition in Festival Square. Revive Magazine talked to Karl Hyde about its work, and what inspired him to help create it in the first place.

Looking for an Answer

“I was walking down the street with my kids, and they were pointing at people in doorways asking who they were and what they were doing there, and I realised I couldn’t answer them properly. There was something unacceptable about walking past someone who was exposed in such a way.”

Karl thought about this for a long time, until it got to a point where he felt he had to do something.

“Even if the something you do seems small, it’s more than doing nothing.”

The inspiration came from an installation he had put together in Japan, called Tokyo Street Poem, and when MIF originally asked for music-based ideas, instead Karl suggested this.

Manchester Street Poem links cardboard, a material associated with homelessness, with the words of homeless people themselves.

“Cardboard is a discarded material, but it provides shelter, warmth and privacy.” 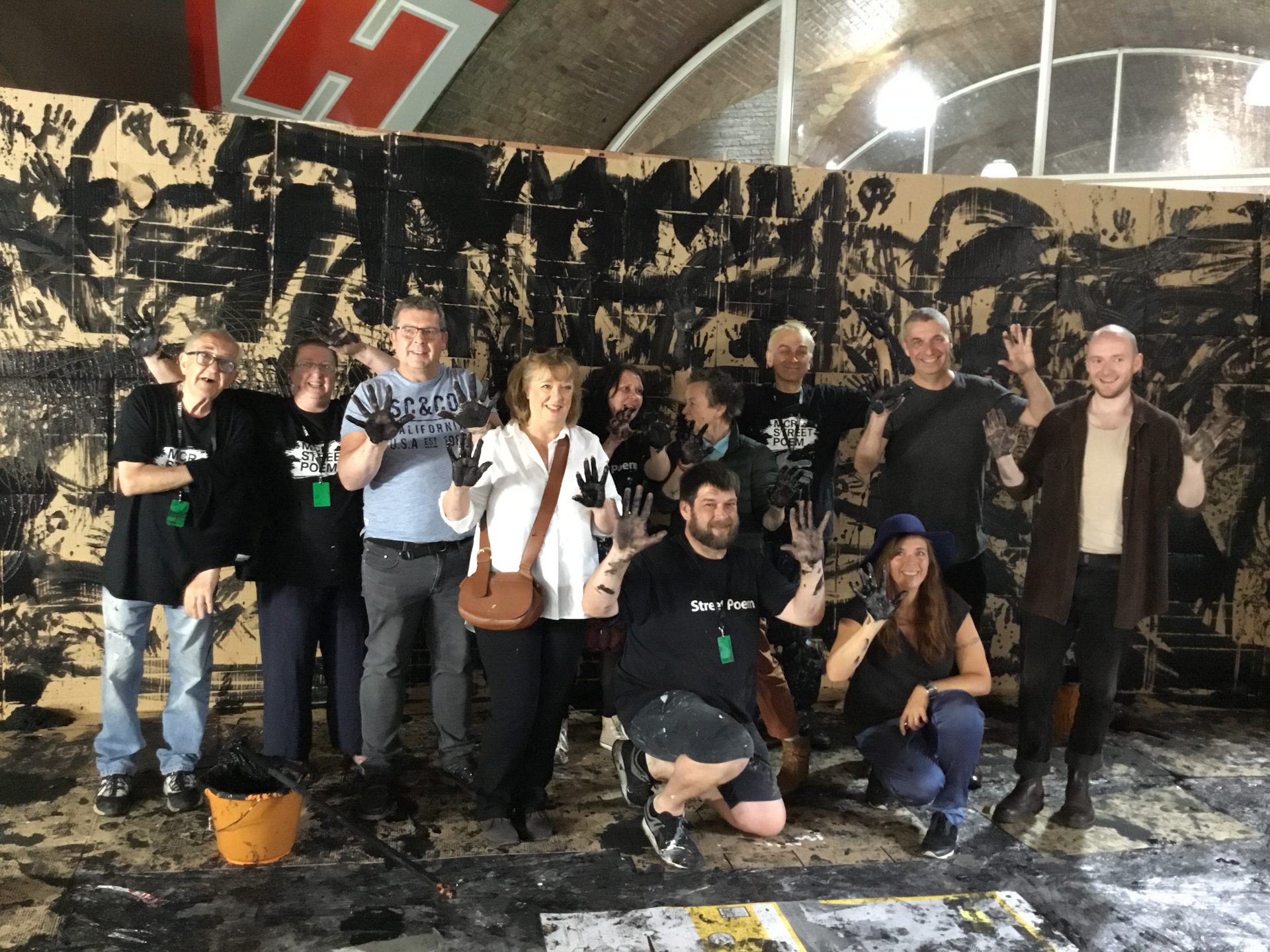 “It’s about creating a place where people who don’t get listened to or spoken to are acknowledged and given a voice.”

Together with volunteers drawn from agencies, and from people who had experienced life on the streets themselves, with the help of MIF, Karl has created a production team, where everyone works together on an equal footing.

For MIF 2019, they created a temporary workshop at the old Bauer Millet arches on Albion Street, by Deansgate. Here they are producing large-format artworks on a daily basis.

Visitors can see the process for themselves by visiting the space, while the finished pieces are on display in Festival Square.

Visitors feel both moved and lifted by the experience. It is an uplifting, emotionally generous and mindful project with mutual respect at its heart.

The Future for Manchester Street Poem

Manchester Street Poem has held regular, monthly workshops around Manchester since 2017. Here, homeless people can tell their stories and the team also invites and engages with other institutions to help the project and its participants.

“We’re always looking for ideas. The big events draw attention to what we do. They let people in the city know there’s hope, and I’ve found a lot of hope here, among people who might be thought of as written off. But in reality, no one is written off, ever.”

Karl sees his job as him going where he feels the project directs him to go, playing his part as a member of the team. This work includes putting up cardboard, painting words but also talking and holding meetings with people who can help the project continue.

“It’s been the best thing I’ve ever been involved in. in my life.”

Visit the living archive at manchesterstreetpoem.com

Is Any Attention Better Than None? by Susan Leigh

When a Good Friend Treats You Badly, by Susan Leigh

When It’s Time to Return to Work by Susan Leigh

Who Looks After You? by Susan Leigh

Do You Think That’s Funny? by Susan Leigh

Hayley Palmer – Finding A Way To Do My Dream Job

Are You Too Keen to Fall in Love? by Susan Leigh

What Would They Think? by Susan Leigh

ABOUT US
Revive Magazine is a curious, honest and playful independent publication. It’s a place to read stories and look at life in a different, inspirational and unique way – where our readers are sometimes our writers, music fanatics, fashion creatives, foodie lovers and photographic displays of creativity and more. Exciting reads that engage the audience, where they read the magazine from cover to cover and struggle to put it down.
Contact us: hello@revivemagazine.co
FOLLOW US
© Copyright 2019 - Revive Magazine UK and is owned by Arctic Fox Studio Ltd
This website uses cookies to improve your experience. This website contains affiliate links and which we could be compensated for if you make a purchase after clicking any of the links."We'll assume you're ok with this, but you can opt-out if you wish. Cookie settingsACCEPT
Privacy & Cookies Policy

When Life Doesn’t Go to Plan, by Susan Leigh | Revive...